On the eve of the National and Mid-Autumn Day on September 29, 2020. Chengdu Research Base of Giant Panda Breeding (hereinafter referred to as the “Panda Base”), together with the Executive Committee of the 31st Summer World University Games Chengdu 2021, held a grand appearance event for several newborn giant panda cubs born in 2020.

In order to make the Chengdu 2021 FISU World University Games a memorable event. The performances combined giant pandas with sportsmanship, allowing panda cubs to compete in a fierce and unique "sprint race" on a track-style platform. The cubs included the “Three Giants” born in the Sun Delivery Room – Re Gan Mian, Dan Hong Gao and Chun Sheng, and the “Most Distinctive Four” born in the Moon Delivery Room – Run Yue, Ai Jiu, He Hua and He Ye.

The “Three Giants” from the Sun Delivery Room are the earliest panda cubs born at the Panda Base this year. Twin brothers Re Gan Mian and Dan Hong Gao were born on March 17, and Chunsheng on March 21. Born during COVID-19, they not only set the record for the earliest time of birth, but also gave hope to the people affected by the epidemic and courage to the medical workers on the frontline fighting against it. In order to commemorate the efforts of all medical workers. The medical staff of the Sichuan provincial medical team in Hubei named the twins after the famous two snacks, Re Gan Mian in Wuhan, and Dan Hong Gao in Chengdu. This was all done to bring Wuhan and Chencgdu together and to pay tribute to all medical workers who have rendered selfless services during the epidemic.

The four giant panda cubs from the Moon Delivery Room have received a lot of praise from their fans for their distinctive features – Runyue has the yellowest fur, Ai Jiu has the heaviest birth weight, He Hua is the most irritable one, and He Ye has the strongest character. The four distinctive cubs made their debut in the outdoor activity field of the Moon Delivery Room together as a group.

According to the person in-charge at the Panda Base, among the giant panda cubs making their appearance, the “Three Giants” of the Sun Delivery Room are more than half a year old and they all weigh nearly 13kg. They love eating, sleeping and playing, and they have beenvery active in the appearance event. Among the younger “Most Distinctive Four” of the Moon Delivery Room, Run Yue and Ai Jiu weigh more than 7 kg, while twin siblings He Hua and He Ye weigh nearly 4 kg. These seven cubs have been growing well and they are in good health. In 2020 alone, a total of 10 giant panda cubs have been born at the Panda Base.

Not only has the appearance of the seven panda cubs been a special gift for the 71st anniversary of the founding of the People's Republic of China, it has also been a great motivation for the upcoming 31st Summer World University Games in Chengdu in 2021. Finally, we wish the motherland more prosperity., May the Chengdu FISU World University Games be successful and we hope all the baby pandas will grow healthily! 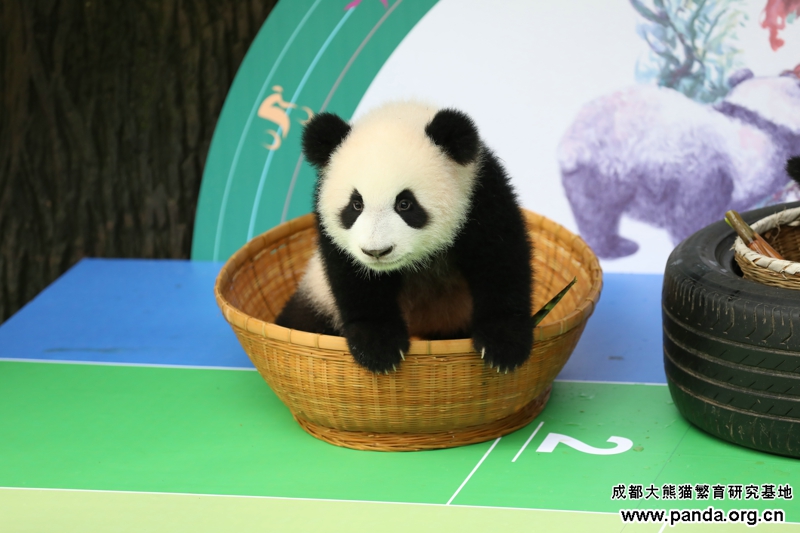 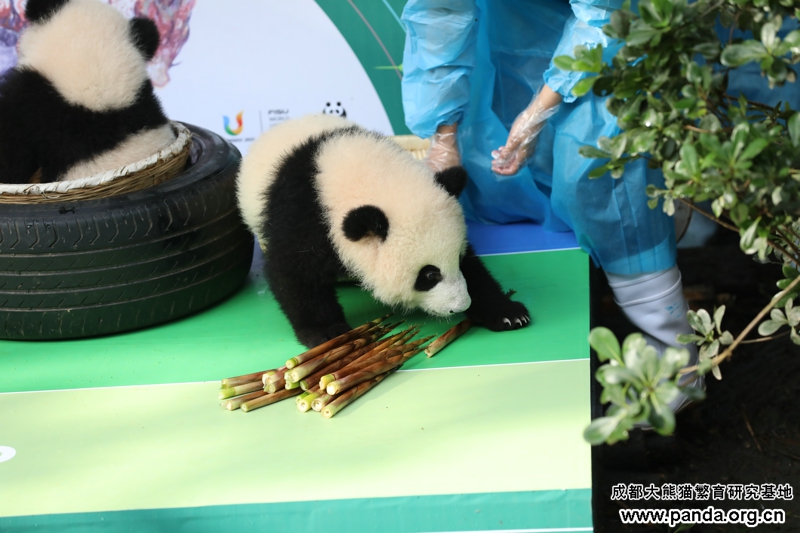 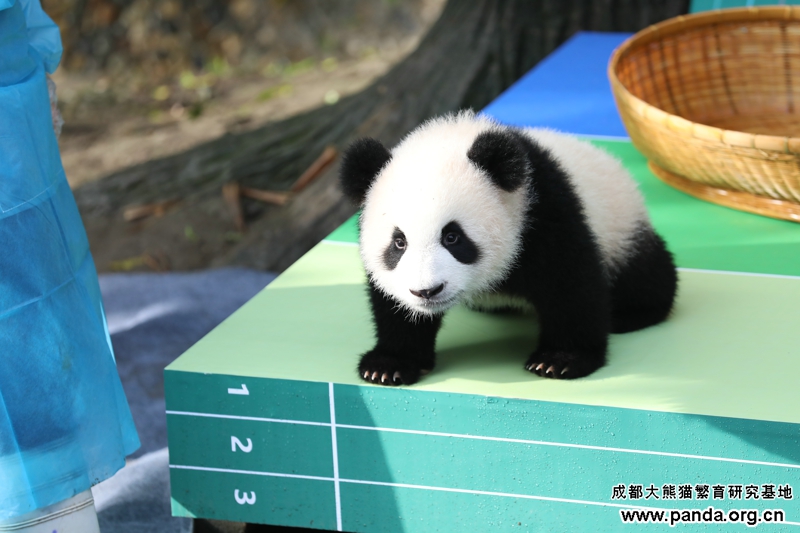 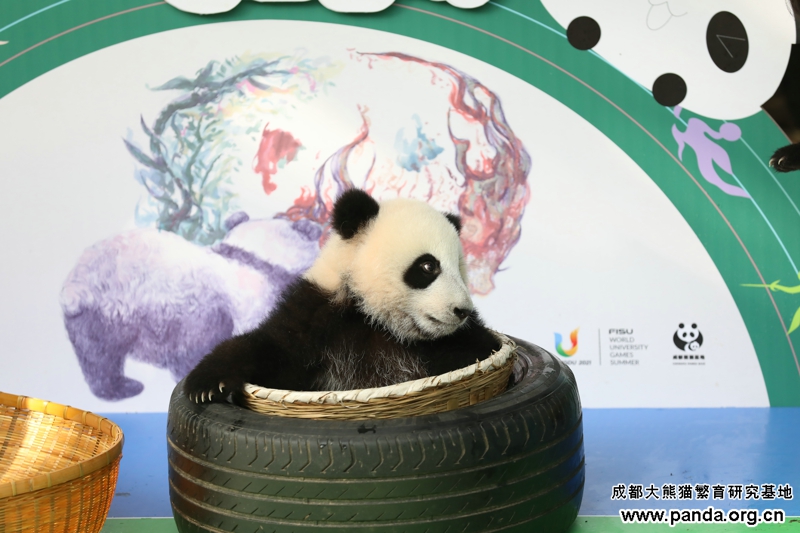 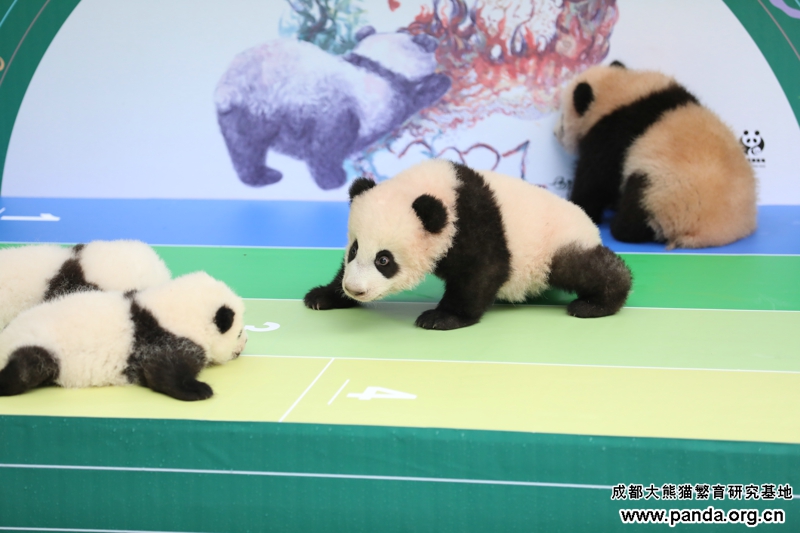 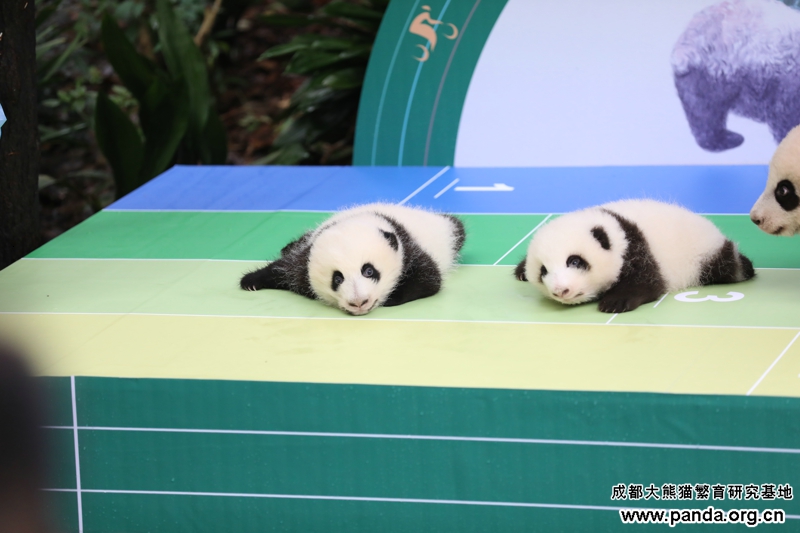 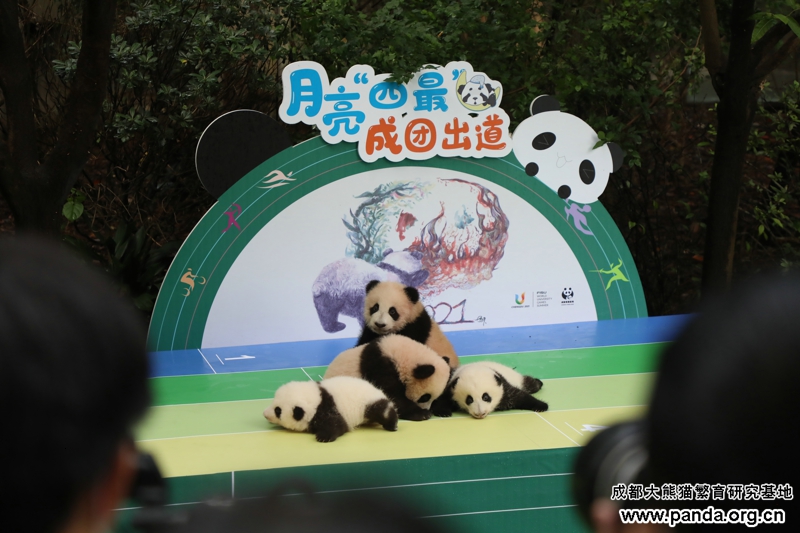 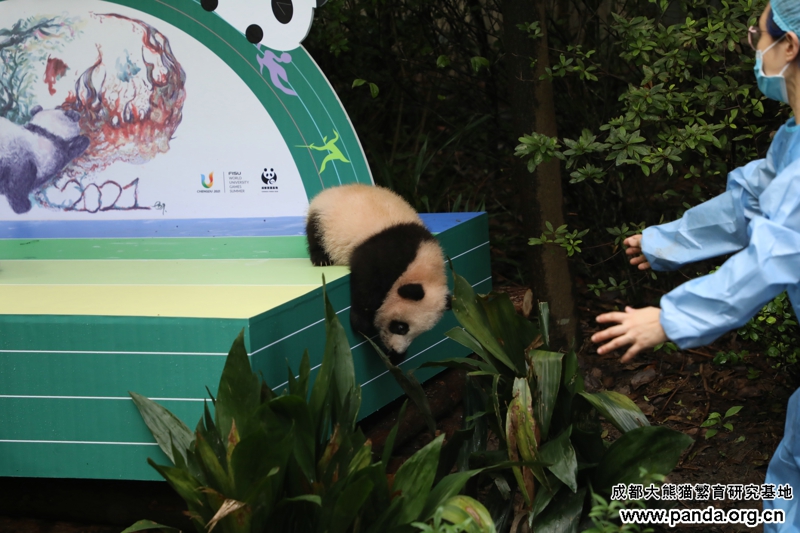 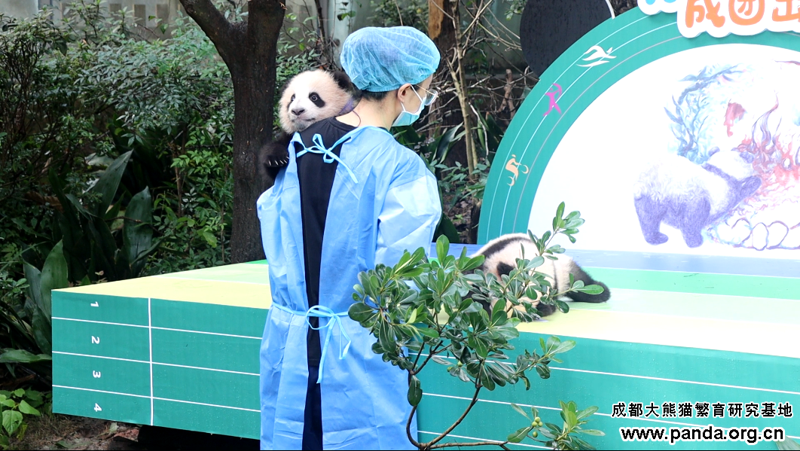 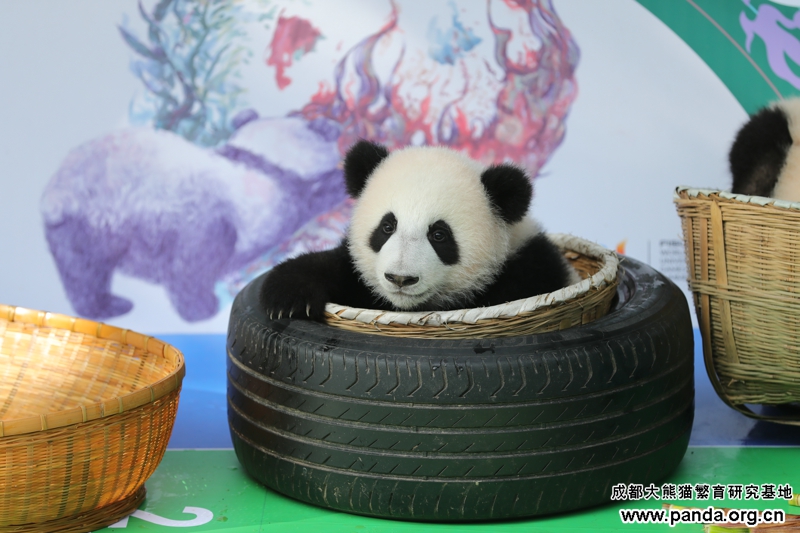 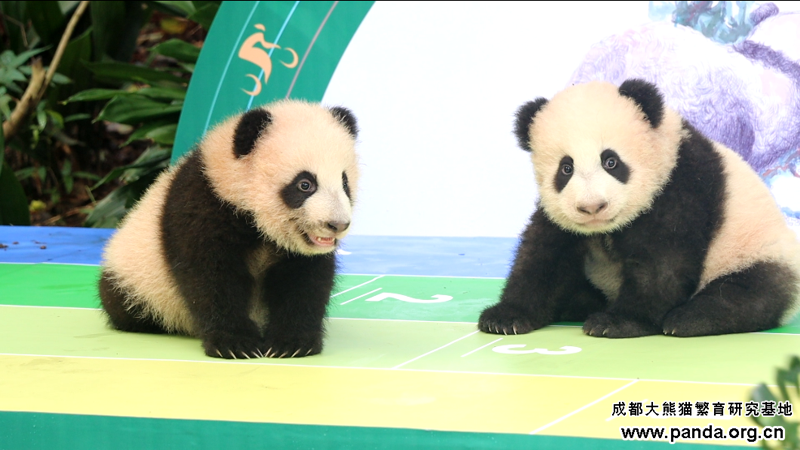 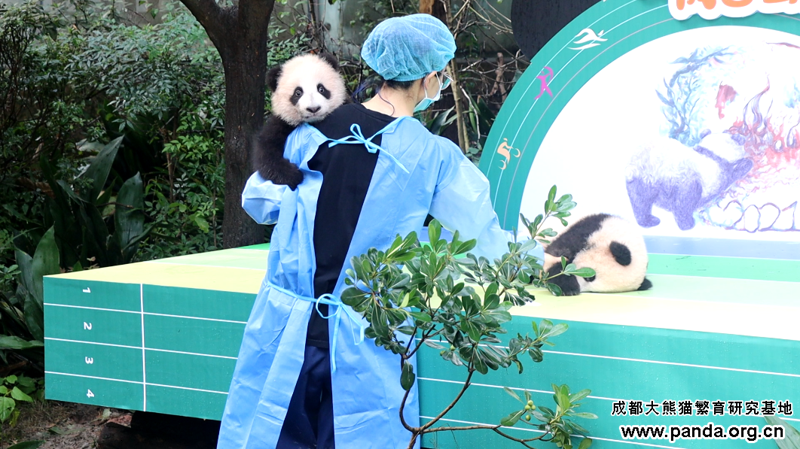 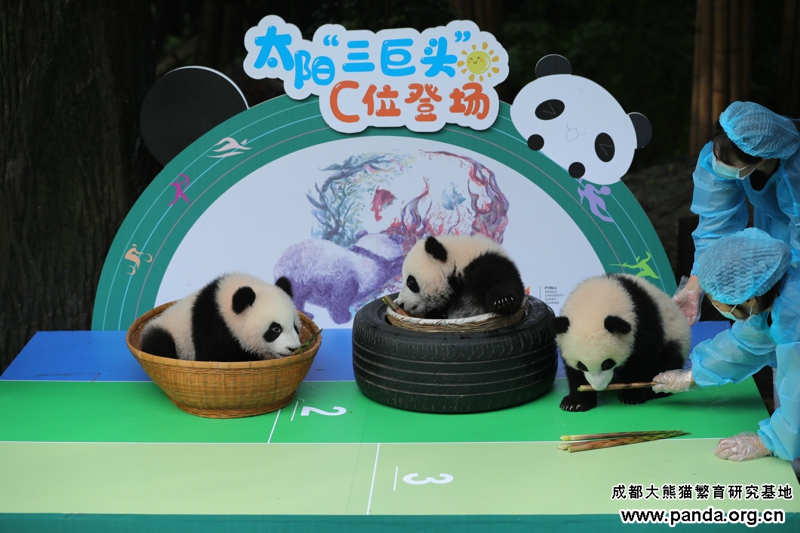 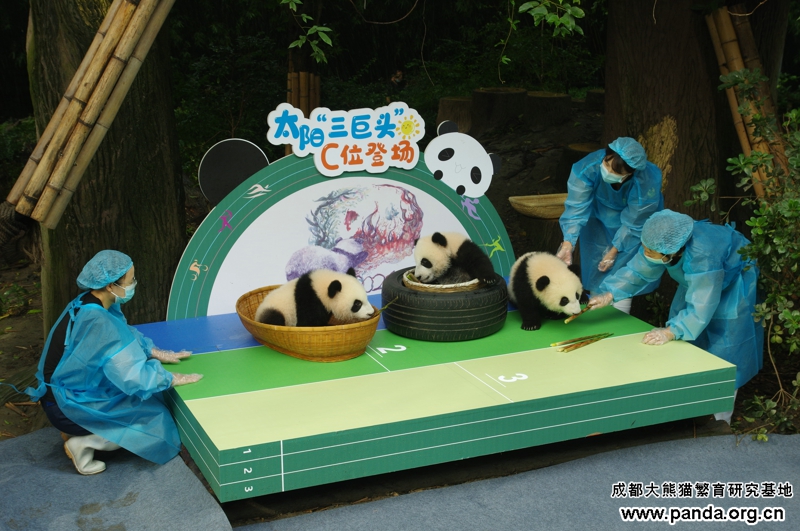 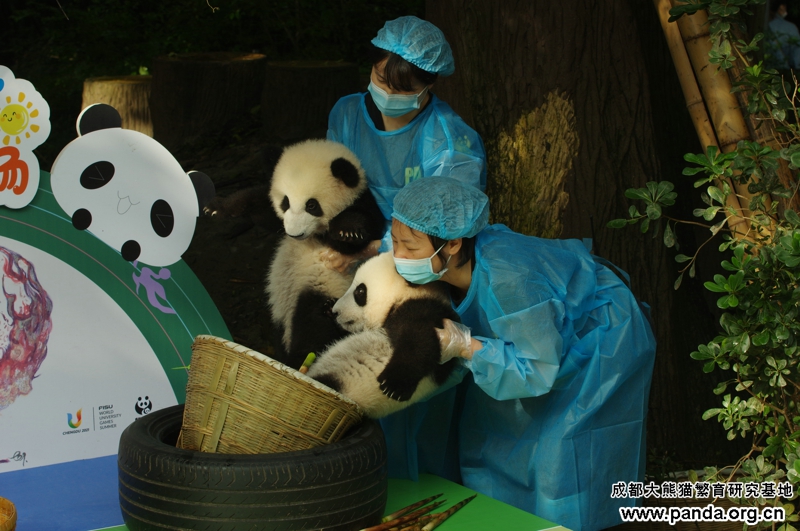