The year of 2019 marks the 15th anniversary of the establishment of the China-Italy comprehensive strategic partnership. During his visit to Italy, President Xi Jinping noted that China and Italy should create cooperation highlights, make joint efforts to build the “Belt and Road”, and strengthen development strategy links and practical cooperation planning. President Xi also stressed that both parties should improve cultural and educational exchanges, strengthen exchanges and cooperation in culture, education, film and television, media and other fields, and build a strong people-to-people bond.

Not long ago, the signing ceremony of strategic cooperation between the Chengdu Research Base of Giant Panda Breeding (hereinafter referred to as the “Base”) and RomExpo was held in the Base. The signing ceremony was witnessed by Wu Shengcai, Director of the Protection Department of Sichuan Forestry and Grassland Administration, and She Yi, Deputy Director of the Wildlife Protection Department of Chengdu Park City Construction Administration. Zhang Zhihe, Secretary and Director of the Base, and Amando Soldani, Chairman of the RomExpo, respectively made position statements at the ceremony. The event also saw the presence of leaders and guests from enterprises and public institutions, such as Sichuan Airlines, Chengdu Branch of Industrial and Commercial Bank of China Limited, Migu Culture and Technology Co., Ltd, CCTV iPanda channel, Beijing Jinshang Longying Culture Communication Co., Ltd.

At the ceremony, Amando Soldani, Chairman of the RomExpo, stated, “It’s a great honor to build a cooperative relationship with scientific research institutions like the Chengdu Research Base of Giant Panda Breeding”. I believe that both parties will embrace a bright vision for the future and usher in a new journey.

Zhang Zhihe, Director of the Base, also expressed in his speech the hope that cooperation between both parties will inherit and promote the spirit of the ancient Silk Road, make the event of the 50th anniversary of the establishment of diplomatic relations between China and Italy in 2020 even better, and contribute in improving the global influence of the giant panda culture. As an external brand image window unit in the field of giant panda research and protection in China, the Base has not only the world’s largest giant panda captive breeding population with a total number of 206, but also owns the cultural resources with great brand promotion value and a wide range of domestic and foreign cooperation channels. Consequently, the Base has actively explored the culture and art fields including giant panda exhibition, music, drama, film and television, publication.

RomExpo is an international consulting company with the goal of creating and providing global opportunities for cultural and business exchanges for institutions, organizations and enterprises. RomExpo has been committed to cooperating with China in various activities since 2014. It has successfully held large-scale transnational exchange events across wine, art, football and other industries.

With giant pandas serving as a middle bridge, the Base and the RomExpo will carry out extensive and in-depth cooperation between China and Italy in panda protection research, national park construction, cultural exchange and communication, cultural and creative industry R & D, science popularization and education. Both parties will join hands to spread the concept of giant panda protection and the spirit of peace, friendship and public welfare represented by the giant panda throughout the world, and build a bridge for scientific and cultural exchange on giant pandas between China and Italy.

As for the “Belt and Road” Initiatively, culture takes precedence over the rest. The establishment of long-term cooperation between both parties is an important measure taken by the Base in response to the implementation of the “Belt and Road” national strategy. This will further enhance the external publicity penetration of Tianfu giant panda culture, fully demonstrate the unique charm of the hometown of giant pandas to the world, and present a gift to the 50th anniversary of the establishment of China-Italy diplomatic relations in 2020. 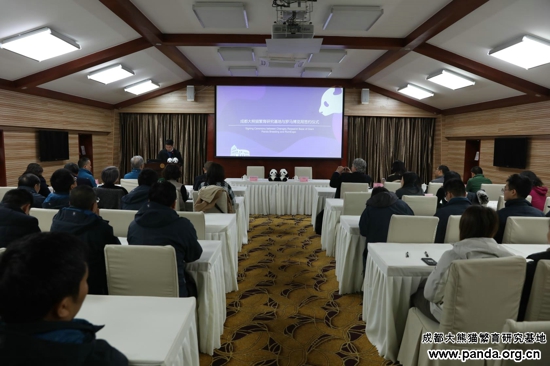 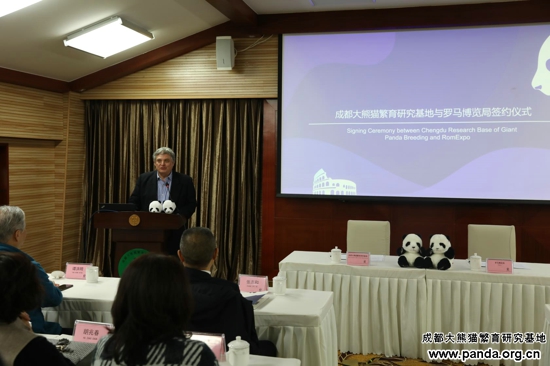 Amando Soldani, Chairman of the RomExpo, delivered a speech 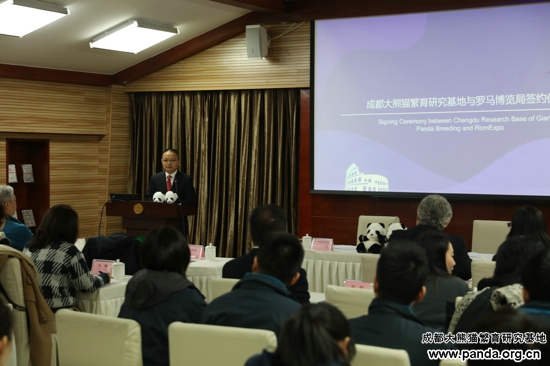 Zhang Zhihe, Director of the Base, delivered a speech