The Hundred Days Celebration and Naming Ceremony for the Newly-Born Chengdu Panda Twins in Germany were held in Germany Berlin Zoo on December 9, 2019 (German local time). At the ceremony, the panda twins were named “Meng Xiang” and “Meng Yuan”, signifying that all wishes and dreams will come true. “Meng Xiang” and “Meng Yuan” presently weigh 6.3kg and 6.1kg respectively, both in good health conditions. They have started trying to walk and are expected to show their walking skills again in early 2020.

There were more than 100 attendees at the Naming Ceremony, including Wu Ken, Chinese ambassador in Germany; Michael Mueller, Mayor of Berlin; Andreas Knieriem, Director of Berlin Zoo; Lan Jingchao, Deputy Director of Chengdu Research Base of Giant Panda Breeding; and journalists from different countries. The guests stated on the site that they’re honored to witness the Naming Ceremony for the two newly-born panda cubs and that this activity would strengthen the profound friendship between the Chinese and the Germans.

On June 24, 2017, at the time of the 45th anniversary of establishment of diplomatic relations between Germany and China, the Chengdu giant pandas “Meng Meng” and “Jiao Qing” left the Chengdu Research Base of Giant Panda Breeding (hereinafter referred to as “Chengdu Panda Base”) for the Berlin Zoo in Germany, in accordance with the central government’s arrangements. This officially began Sino-German international scientific research cooperation on giant pandas. For this reason, President Xi Jinping delivered an important speech: It is of great significance to restart Sino-German cooperation on giant panda protection and research. Friendship between both nations holds the key to sound state-to-state relations. I hope that “Meng Meng” and “Jiao Qing” would enhance diplomatic relations between Germany and China and become new ambassadors of friendship between the people of both countries.

In late March 2019, “Meng Meng” was in estrus and the Chengdu Panda Base immediately assigned two giant panda experts to oversee the giant panda breeding work in Germany. On April 6, 2019, after “Meng Meng” failed to mate with “Jiao Qing” seven times due to the inadequate sexual behavior expression of “Jiao Qing”, the experts from the Chengdu Panda Base implemented artificial insemination for “Meng Meng” and successfully impregnated “Meng Meng”, using the brief window of opportunity of its estrus.

Thanks to Sino-German joint efforts, the brothers “Meng Xiang” and “Meng Yuan” have been in good health conditions in terms of milk drinking volume, activity level, defecation volume among others since their birth. According to the breeder from the Chengdu Panda Base, both panda cubs are very lively and naughty. “Meng Xiang” has bad temper and is full of “masculinity” like their father “Jiao Qing’, while “Meng Yuan” appears a bit quiet and inherits the personality of their mother “Meng Meng”. The breeder happily remembered those warm and interesting scenes during the breeding of the cubs. One month ago, when both panda cubs were not big, “Meng Meng” sometimes held and fed its cubs with one hand, while stretching another hand to hold the breeder’s hand, as if she could only feed the cubs securely this way. 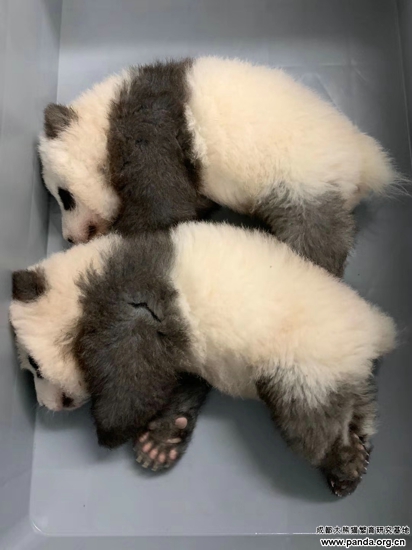 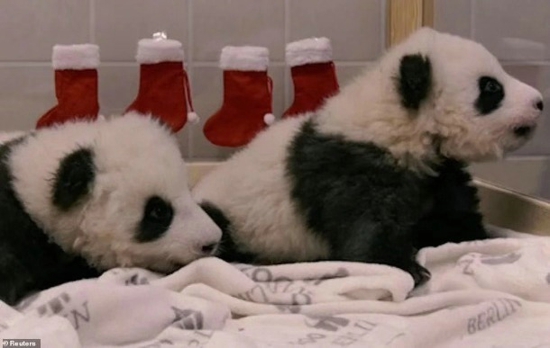 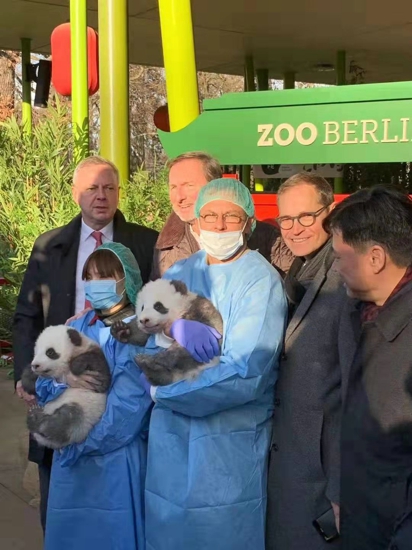 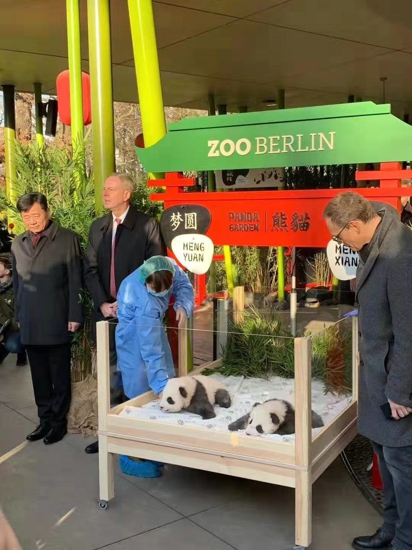 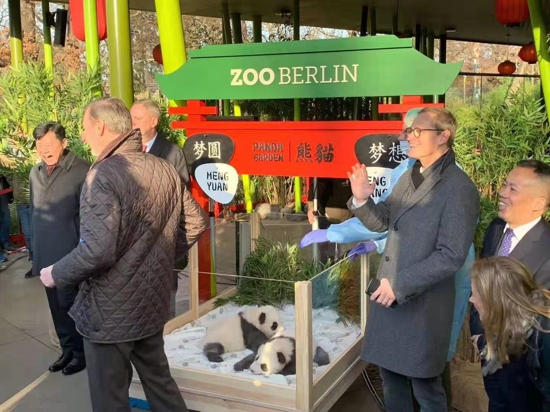 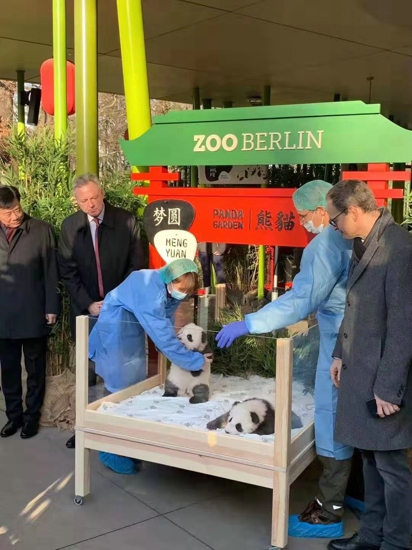 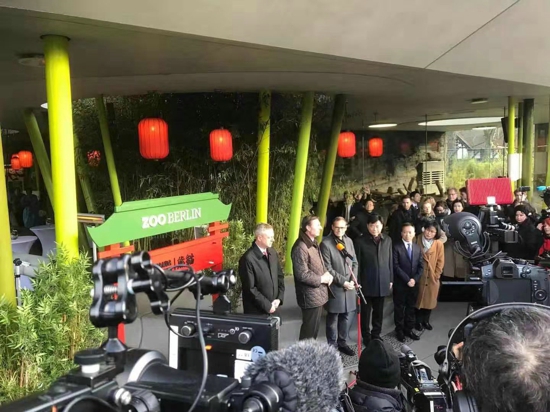 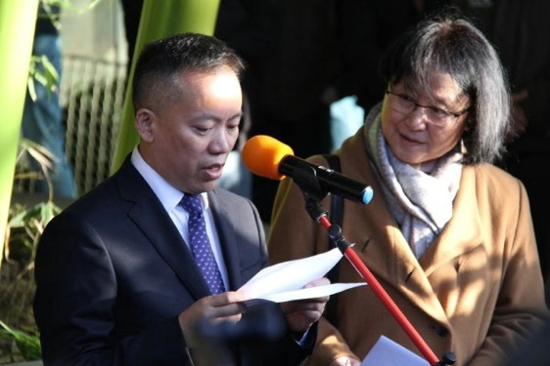 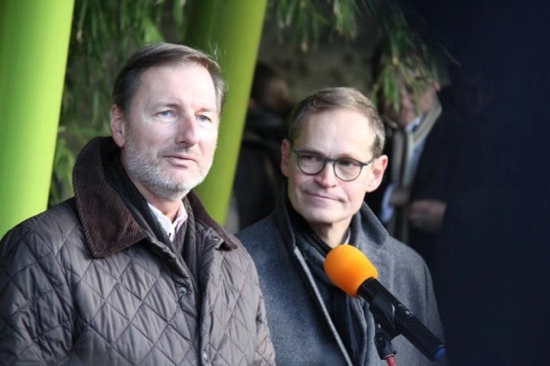 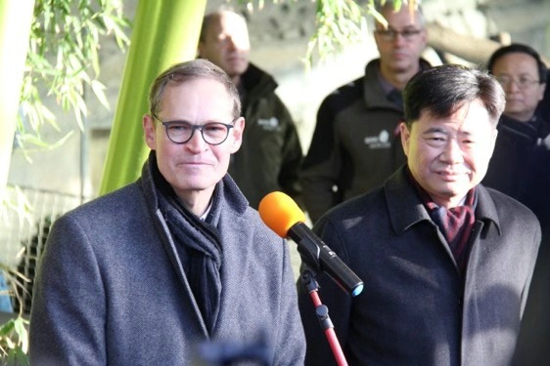 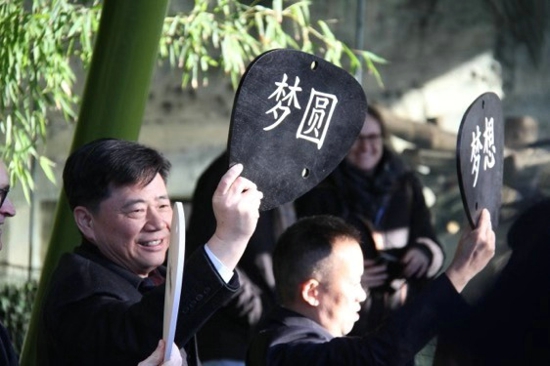 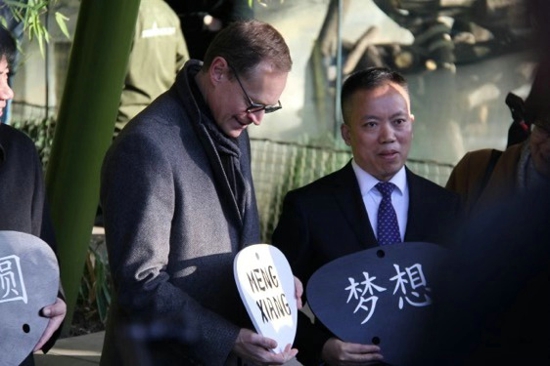 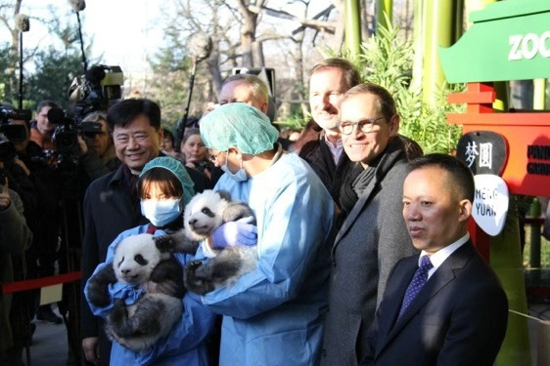 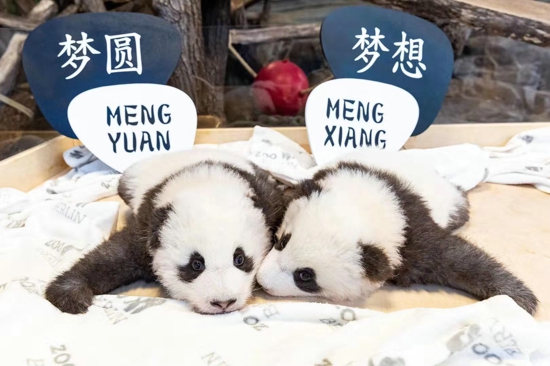 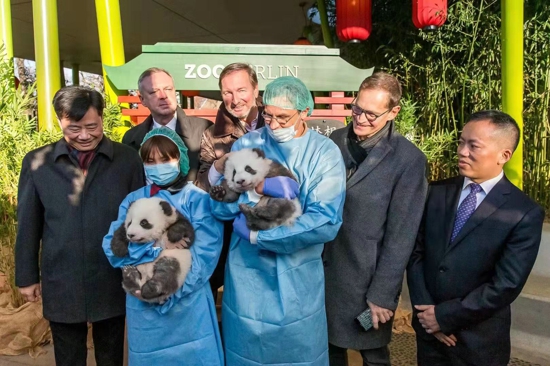