Chengdu Research Base of Giant Panda Breeding collaborated with China Mobile Migu to present the first live streaming of giant pandas in the world using 5G+4K+VR technology on September 29. Fans of giant pandas are able to observe the daily life of Chengfeng, Chenglang and other giant panda babies born in 2019 in an all-round manner thanks to the support of 5G and 4K and VR technologies. This event aims to carry forward and propagate the giant panda culture using advanced live streaming technology, and celebrate in a special way the incoming 70th anniversary of the founding of the People’s Republic of China.

The livestreaming will take place at the Sunshine Nursery House at the Base from September 29 to October 3, with giant panda babies born in 2019 as the subject. Among them includes two sisters Chengfeng and Chenglang. Although they are less than four months old, they no doubt are already “Internet celebrities”, in particular the younger sister Chenglang. She was only 42.8g at birth and 37.9g after dehydration. Besides, she was a super-light cub among the giant panda babies, and earned the moniker “thumb girl” by the netizens. Now, Chenglang has braved through multiple ordeals thanks to the considerate care from the staff at the Base and has grown into a healthy big baby. She lives happily with other giant panda babies in the Base, the “most adorable kindergarten”.

The live streaming started at 11:00 am on September 29 simultaneously via Migu Circle, Migu Video, Migu live streaming, Migu C, Migu TV, Migu Youtube official account. This is the first time throughout the world that the life of giant pandas is live streamed using 5G+4K+VR technology. Netizens around the world are able to have a close-up look at the chubby cute giant panda babies in high definition via the preceding platforms. The VR view allows the audiences to observe the giant panda in 360 degree, offering the audiences a new viewing experience through a unique angle of view. This is immersive perfect live streaming for the audiences, bringing them new sensory experience using technology.

Original AR joint videotaping pays tribute to the 70th anniversary of the founding of the People’s Republic of China in an innovative manner.

During the live streaming on September 30, China Mobile Migu will also present an innovative link namely, realizing the interaction of the real giant panda with “patriotic giant pandas” on the same screen by means of the “AR Joint Videotaping” function of Migu Circle. The patriotic giant panda on the mobile phone screen vividly waves the glow stick and sings My Motherland and Me, paying tribute to the 70th anniversary of the founding of the People’s Republic of China in an innovative manner.

The live streaming of giant panda presented by the Base and China Mobile Migu using 5G+4K+VR technology will last till October 3. The activity “Express Your Love to Motherland with Giant Panda” held at the same time also provided more giant panda IP-related contents and interaction, including Learning Giant Panda in One Minute, a short-video program to popularize knowledge about giant panda, and “Patriotic Baby Panda”. This cooperation closely combined the giant panda culture with 5G+4K+VR technologies, with the purpose of making wishes to the 70th anniversary of the founding of the People’s Republic of China and introduce to the world Chinese traditional culture embodied by the giant panda culture. 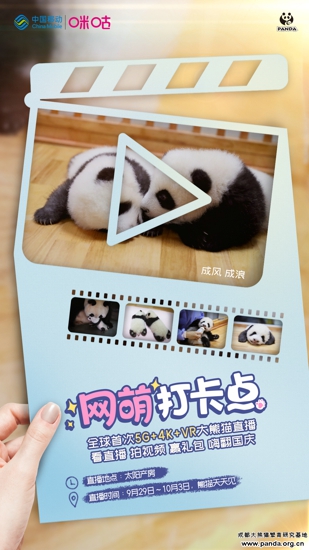