Home>News
New Fruit of Sino-German Friendship: Meng Meng, a Giant Panda from Chengdu to Germany, is about to Have Baby

Meng Meng six years old, a female giant panda from Chengdu to Germany, is about to have baby. This means a first giant panda cub is very likely to be ever born in the history of Germany.

On July 5, 2017, President Xi Jinping and German Chancellor Angela Merkel attended the opening ceremony of Panda Garden at the Berlin Zoo in Berlin. President Xi Jinping pointed out in his speech that giant pandas Meng Meng and Jiao Qing from the Chengdu Giant Panda Research and Breeding Base arrived at Berlin Zoo officially, and hopefully Meng Meng and Jiao Qing can draw the Chinese and German people closer and become the new messenger of friendship between the two nations, and may be one of the new fruits produced from the Sino-German friendship.

In late March this year, giant panda Meng Meng reached her heat cycle. Chengdu Giant Panda Research and Breeding Base (the “Base”) sent right away Mr. Liu Yuliang, giant panda reproduction expert and research fellow, and Mr. Cai Kailei, associate research fellow, to Germany to assist in the reproduction work. The next day after they arrived at Berlin Zoo, they had a meeting with experts from Berlin Zoo and Leibniz Institute for Zoo and Wildlife Research (IZW) to come up with a proposal for hormone test on Meng Meng. Since March 28, experts from the Base observed how Meng Meng behaves every day during the heat cycle, and adjusted the proposal for the hormone test in time according to the actual development of Meng Meng. On April 5, Meng Meng reached her rutting (sexual ctivity) peak. On April 5 to 6, Meng Meng and Jiao Qing tried natural mating for 7 times under the guidance of experts from the Base and the joint efforts of the two teams. However, the mating all failed due to Jiao Qing’s insufficient sexual expression behavior.. At 9:00 am April 6, semen was collected from the male panda Jiao Qing for the first time under the joint effort of the three teams of experts, i.e., experts from the Base, workers of Berlin Zoo and experts from IZW. At 10:11 am the same day, Meng Meng received artificial insemination in her fertilization stage with the aid of Mr. Liu Yuliang, expert and research fellow from the Base. This is the only artificial insemination Meng Meng received during her rutting peak. Afterwards, the remaining semen was frozen and performed artificial insemination to Meng Meng.

On August 27 Beijing time, breeders from Berlin Zoo successfully put Meng Meng lie down on her back with apples, panda cookies and honey water for a few minutes. During that time, professor Thomas Hildebrandt from IZW performed an ultrasound scanning on this 92kg panda. Subtle but strong heart beat was detected inside Meng Meng’s uterus by reproduction expert Hildebrandt after nearly 20 weeks upon the mating between Meng Meng and male panda Jiao Qing. Doctor Andreas Knieriem, head of Berlin Zoo and East Berlin Zoo, was very pleased about the confirmation pregnancy of the panda. “Each baby born is a special gift for the endangered species like giant panda.” The duration of pregnancy of a giant panda is 3-6 months. A newly-born baby panda is smooth and cannot open its eyes. The average weight is only 140g, representing a minute proportion of her mother’s weight.

On August 14, the Base sent two nursing experts to Germany. The Sino-German team has prepared well for the birth of the baby panda. The hormone test at present shows that Meng Meng is likely to be in labor in next one or two weeks based on her behavior and the size of the fetus. The team is now paying close attention on the mother-to-be. They have taken turn at night to observe Meng Meng since last week. In the days to come, they will continue their properly-distant and cautious observation on Meng Meng. Xie Yi, a nursing expert from the Base, and Liao Lihui, a veterinarian from the Base, have had full understanding about the physical conditions of Meng Meng, and had a close communication and exchange with the working team at Berlin Zoo. Meng Meng is in good shape now, and they will closely observe Meng Meng’s physical conditions, Xie Yi said. “We are now observing Meng Meng secretly, and we will take action once anything comes up,” said Knieriem. As male panda plays no role in the nursing of baby panda, the father-to-be panda Jiao Qing is still available for visit from the tourists.

Normally, a panda mother would give birth to one or two cubs, and only gives birth to three cubs on rare case. Although the ultrasound scanning only detects one heartbeat, there is possibility for twins based on how Meng Meng cooperated with the examination.

As of this year, the Base has successively cooperated with 16 countries and regions in giant panda scientific research, and is now conducting international giant panda scientific research and breeding projects with seven countries including Japan, USA, Spain, France, Canada, Germany and Demark. A foreign institution with technical support from the Base has bred 2/3 giant pandas abroad with merely 1/3 of the population, namely 32 pandas, being the one overseas with highest survival rate of giant panda so far.

The breeding and nursing of giant panda cub is the key and also the most difficult of the giant panda protection due to the peculiarity of the specie. In the early 21st century, the Base research team made breakthrough in technical difficulties like proper mating and artificial nursing, unveiling the secret of artificially-aided giant panda reproduction and nursing technology. The successful pregnancy of the panda in Germany this time demonstrates the international first-class professional and technical level of the research fellow at the Base and also fully shows the remarkable achievement made by Sino-German giant panda breeding and reproduction team through friendly exchanges after overcoming various complicated situations in technology, culture and coordination. Nowadays, the giant panda scientific research technology in China has turned into an “exported” scientific research technology that showcases the power of Chinse technology brand. 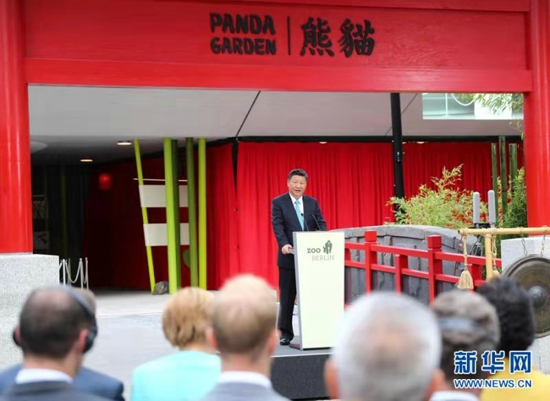 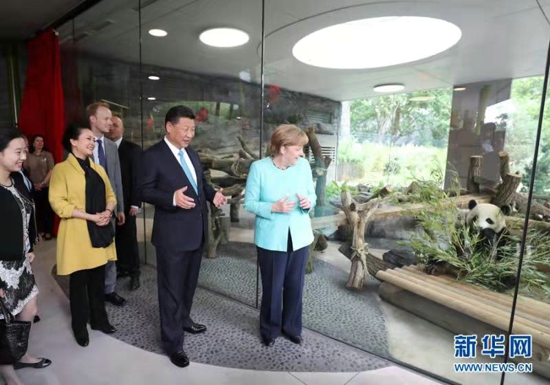 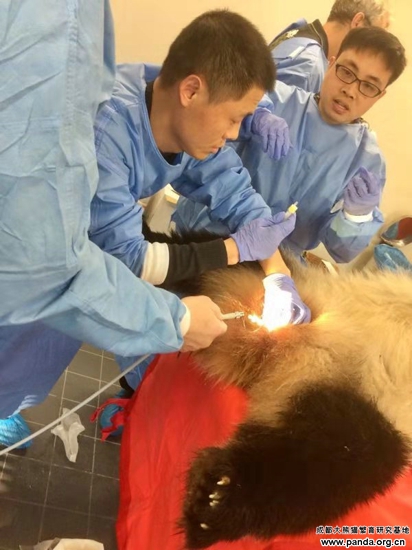 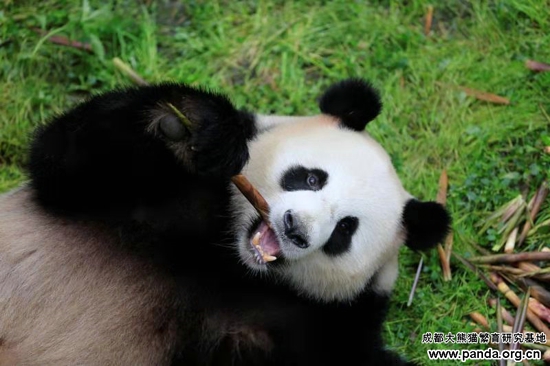 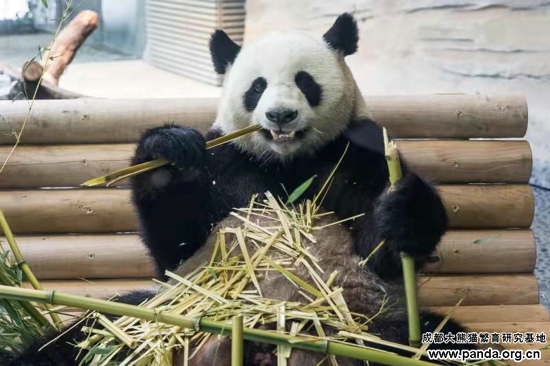 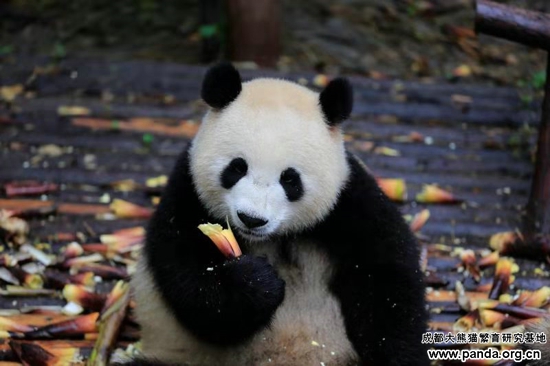 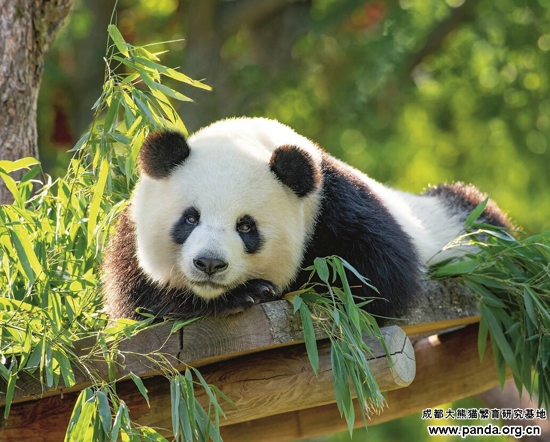